Returning to my car after getting groceries this morning, I stuck my key in the trunk lock – and instead of catching, twisting a quarter-turn, then popping the trunk open, the key spun ‘round and ‘round inside the metal lock.  It appears the lock has been stripped?

I’ve never had anything like this happen before…. Fortunately the key still worked in the door lock (and, more importantly, the ignition), so I popped the trunk using the lever inside the driver’s side panel, put my groceries and purse in the car, then did a quick examination of the trunk release mechanism.

It seems there’s a metal bar that catches and latches to keep the trunk securely closed; and it looked like the bar was stuck in the “up” position.  So maybe I needed to manually flip the bar to the “down” position, and that would fix the issue?  Maybe the lock wasn’t catching because it didn’t have anything to catch against?

So I flipped the metal bar, and closed the trunk.  I tried the key in the lock again.  Same spinning.  Sigh.  I went back to the driver’s side door, and pulled on the trunk release lever.  Nothing.

Oops.  I guess the metal bar was meant to be in the “up” position after all.  Crap.

Except, now my purse – and my rapidly melting groceries – were trapped in the trunk.  Double crap.

I quickly drove home (thankfully I live literally 5 minutes away from the grocery store), pulled into the garage, and opened the back door of my car.  I thought I would just pull the passenger seats down to access the trunk, get the groceries in the fridge, and then worry about dealing with the trunk lock issue.  First things first.

As I looked for the lever to pull to release the back seats and fold them down, I realized that oh, my car isn’t designed like that.  It doesn’t have seats that lay flat.  These seats are welded upright.

Triple crap.  Am I totally screwed?

I looked at the seats more closely.  There has to be a way to get into the trunk from this part of the car; I mean, what kind of completely piss-poor (pardon the language) design would this be if there was no way to access the trunk from inside the vehicle? I mean, c’mon….seriously?  Seriously?!

I then saw that the middle panel of the back seat had a small hinge at the bottom of it.  That must mean it can move… 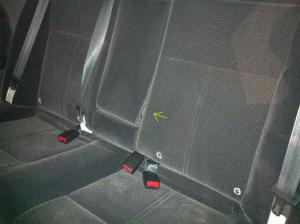 I pulled at the top of the middle back-seat panel – and after a little tugging, a plastic handle was revealed.  Like a secret bookcase in an old mystery house….

I pulled on the plastic handle, and voila!  The trunk!  Success!

Now all I had to do was squeeze my scrawny ass (language, Stef!) through the too-tight opening just enough to extract the bags of groceries (and my purse) from the vault formerly known as my trunk.

But I couldn’t see the bags of groceries; it was too dark in the trunk for me to see anything.  I need a flashlight…. Hey!  I have a flashlight app on my phone!  And to think I wondered when I would ever need that silly app when I downloaded it over a year ago…. I’m sorry to have ever doubted you, Flashlight.

I shined the intensely-bright LED light into the trunk; and it’s there that I saw an image that absolutely made me laugh out loud:

But hey, I needed to open the trunk from the inside, so I pulled the glow-in-the-dark lever, and click – the trunk opened!

At the end of the day, the groceries were placed in the fridge and freezer, a bit shaken but otherwise unharmed.  My purse was returned to its’ rightful place at our entryway inside our house, my wallet happy to be back among familiar surroundings.  Flashlight was given a round of cheers by the other apps, and Facebook finally cut it some slack.  And I delighted in knowing that if I ever got carjacked and then stuffed inside my trunk, I could get out at the first red light – even with a faulty lock.

A "serious" gal who is trying to remember to lighten up and smile.
View all posts by Stef →
This entry was posted in Uncategorized and tagged awesome, cars, clever, humor, laugh, pictures, postaday2011, smile, surprise. Bookmark the permalink.

16 Responses to An unplanned summer adventure