Every environment has its peculiarities.  Fifteen years ago, when I moved to the state I now call home, I had to learn the quirks of my new locale.  It wasn’t long before I realized that a sizable population of the city goes “up north” to cabins every weekend in the summer, plays bizarre games in the winter, and eats some strange foods at various points in the year.  Indeed, food is a big part of many events that take place in the city, and perhaps the best example of this is the annual state fair.

Many citizens attend the state fair explicitly and expressly for the food.  Monstrous portions of anything-that-can-be-skewered-and-fried is the specialty of this event, with a few notable exceptions: mini chocolate chip cookies and freshly extracted milk, funnel cake, and cheese curds.

I had never heard of cheese curds prior to my first fall in my new hometown.  When August arrived, people told me about the wonders at the “Great State Get-together”: the monstrous turkey legs, the roasted corn-on-the-cob swimming in butter, the deep-fried-candy-bars-on-a-stick – and cheese curds.  Over and over again I heard about the deliciousness that was cheese curds.  Yet when I asked people what exactly a cheese curd was, I never got much by the way of a definition, except, “They’re, well, you know, cheese curds.”

I did attend the state fair my first year in this new city (and I attended once or twice in the following years, too), but I wasn’t a fan of the experience.  It was scorching hot on the day I visited the fair grounds, and the sun + lack of shade + crush of people + overpowering smells (think bakery meets fast-food meets barn yard stable) = a mix of factors that left me feeling nauseous and overwhelmed.  I left the fair 30 minutes after I arrived, opting to forgo rides, exhibits, and food experimentation.

In the years from then to now, occasionally an opportunity to experience cheese curds will arise.  But usually, there are other food choices I would prefer to try, so somehow I have made it to this point in my adult life never having tasted a cheese curd.  This fact surprises nearly everyone who learns it – and while I do enjoy being able to share unexpected tidbits about myself with others, I really am curious about the cultural food phenomena that is The Cheese Curd.  So I decided to go ahead and put “Try cheese curds” on my 101 list, and consume them whenever a good opportunity presented itself.

Such an occasion occurred this past weekend.  I had signed up to volunteer at my community’s first ever Pet Expo, and when I opened the door to the field house where the event was taking place, the very first thing I noticed was a very strong smell – not of animals, but of food.  Fried food, to be more specific.  The organizers of the event had arranged for a food truck to be on site, and this particular food truck offered greasy-spoon-type staples: hamburgers, hot dogs, onion rings, French fries – and cheese curds. 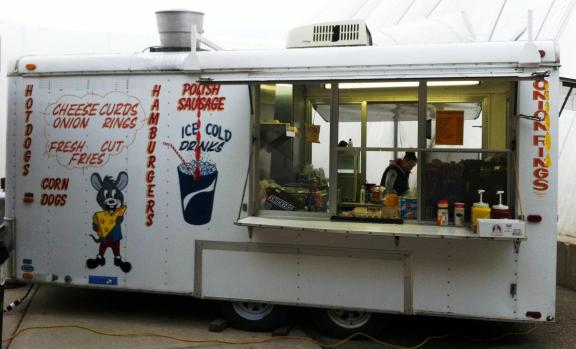 When I checked in to the volunteer table to sign in for my shift, I was greeted with a smile, given a 2-minute explanation of my role, and handed an extra-large t-shirt (it was the only size still available) and a voucher for $5 in refreshments at the food truck.

Looks like my opportunity to taste some cheese curds has arrived.

Near the end of my shift (when activity had slowed and the organizers were getting ready to close up shop for the day), I approached the food truck chef and asked him for an order of cheese curds, please.  Happy for some final business, the man inside the vehicle’s tiny kitchen smiled wide and quickly pulled together a paper basket overflowing with small fried nuggets, which I assumed had cheese inside: 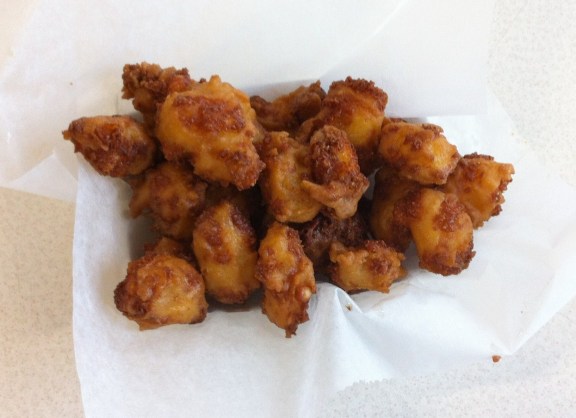 I took the container to a nearby table, sat down, and popped one of the curds in my mouth.

The cheese curd reminded me of a deep-fried mozzarella stick, but with a beer-based batter instead of a breadcrumb-based one, and without any Italian seasoning (or marinara dipping sauce). The cheese curd was hot, highly salty, and overly greasy – it tasted like the love child of melted string cheese and the outer coating of fried mushrooms.  I was pretty certain that white cheese was in the middle of each popper, but I pulled one apart just to confirm: 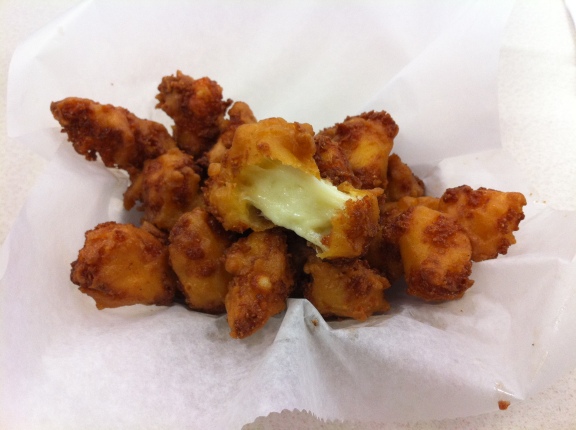 Yup, white cheese inside. (I know the cheese looks more yellow in this pic, but it really was white.)

A minute later I ate a second curd (mostly just to be able to say that I have eaten more than one cheese curd in my life), but after cheese curd #2, I was ready to be done with this experience.  I simply don’t eat wildly unhealthy food – and my poor stomach was already starting to not like the feeling of grease landing in it.  Rather than make myself sick by eating even one or two more curds, I offered the still-full basket to other volunteers at the expo – who each happily took a handful of cheese nuggets to consume.

So there you have it.  My anti-climactic, anti-dramatic adventure into the land of deep fried cheese bits.  While I likely won’t eat cheese curds again in the foreseeable future, I do feel more and more like a ‘local’ with every regional adventure I complete.  Watch out Winter Carnival!  😉