During my youth my mom worked part-time outside the home, and full-time inside of it.  As a result, my parents, sister, and I all sat down to a home-cooked family dinner nearly every week night.  My mom usually served simple-yet-balanced meals (good ol’ meat, starch, vegetables, and milk), complete with some sort of dessert offered at the end of every dinner.  Some nights the dessert was a bowl of ice cream of a handful of chocolate candies; other nights the dessert was a homemade slice of cake or a cookie made from scratch.  (I was in my twenties when I first learned that cookie dough could be purchased ready-made in the grocery store; in our house making cookies always involved creaming sugar and butter, and sifting in flour.)  on just a handful of occasions, the post-dinner dessert was something complex and fancy, like baklava or cream puffs.

I can remember eating baklava exactly two times during my childhood, and I watched my mom make it once.  I remember thinking it looked like she was making a dessert lasagna (which is a kind of what baklava is), and I also clearly remember her saying that working with phyllo dough was very difficult.  Very difficult – which is why she rarely made baklava.  Something about having to keep the dough moist, or else it would crack and crumble and be impossible to work with and destroy the entire dessert… And I remember thinking in that moment, “Well, I guess I’ll just never work with phyllo dough.”  My logic was that my mom was a fantastic homemaker (cook, seamstress, housekeeper, and tender of all things domestic); and if she ever found a recipe, dress pattern, or household chore too difficult, then the task in question would be impossible for me to do.  So at the age of ten or eleven (or however old I was), I made up my mind that homemade baklava and other phyllo-dough-related treats were simply out of the question for me.

Interestingly, I had a similar preconception with puff pastry (and I still have the same notion around cream puffs), but then two years ago (gosh, nearly exactly two years ago!) something came over me, and I decided that being intimidated by an ingredient was stupid.  So I went out and purchased some puff pastry, and made a vegetarian pot pie – and the results were quite good.  Months later, when I decided to attempt a 101 in 1001 challenge, I made a point to both baklava and cream puffs on the list of things to accomplish.  Instead of accepting other people’s experiences as gospel, I wanted to attempt, explore, and arrive at my own conclusions.  Perhaps phyllo dough is an obnoxious ingredient to work with, and perhaps it is totally not worth the effort to manage – but I want to find that out for myself.  I want to see if other people’s ‘truths’ are true for me as well.

I began the task by researching baklava recipes on the internet.  After just a few minutes, I learned that there is pretty much one standard, widely accepted way to make baklava.  So I chose to follow the recipe of a food blogger who supported her explanations with lots of great photos (I’m a visual gal, and love it when people include images to help clarify their words), and headed off to my kitchen with her instructions to see if together the two of us couldn’t manage to whip up a batch of tasty baklava.

What follows is The Pioneer Woman’s baklava recipe, with my changes and commentary noted in italics (or crossed out text, as the case may be…).  Without further introduction, I share with you my experiences with…

Remove phyllo dough package from freezer and place in the fridge for 24 hours to thaw. Then remove from fridge 1 hour before using.

When working with the phyllo dough, only remove the sheets you immediately need, keeping the other sheets covered in plastic wrap, then a damp cloth. (I vividly remember this part from my youth – this was the part my mom deemed as very difficult in the baklava-making process.  As I prepped my stack of phyllo dough, I felt like a surgeon working to save a patient.  I think the world is glad that I didn’t pursue medicine as my profession…)

Toss together the chopped walnuts (and pecans and almonds) and cinnamon. Set aside.

Preheat oven to 350 degrees. Thoroughly butter spray a disposable rectangular baking pan with nonstick spray. (I knew I would be working with copious amounts of greasy and sticky substances; I was willing to spend some money and make a slight environmental dent and purchase a throw-away pan in exchange for not totally destroying one of my two 9”x13” baking dishes.) Make sure the sheets of phyllo will generally fit the pan (if they’re a little bigger, that’s okay.) If they’re much bigger, just trim them with a sharp knife.  (I did end up trimming the long end of each sheet of phyllo, lest I have an inch of unflavored dough along one edge of the finished product.  Blech.)

Using a pastry brush (or a BBQ brush if you don’t have a pastry brush on hand), butter the top sheet of phyllo with melted butter, then grab it and the unbuttered sheet below it. (Painting the butter was quite fun for me – I finally found a type of art I’m actually good at!)  😉  Set the two sheets in the pan, buttered sheet face down. Press lightly into the pan. Repeat this twice more, so that you have six sheets of phyllo in the pan, three of the sheets buttered.  (I completed the first layer of two phyllo sheets – but then kind of forgot the next two rounds.  So my base layer of baklava only has two sheets of phyllo.  I hope it will hold up…)

Sprinkle on enough nuts to make a single layer. (I ended up using a scant 3/4 cup of nuts in each layer.)  Butter one sheet of phyllo, grab that sheet and the sheet beneath it, and place them on top of the nuts. Add more nuts, then two more phyllo sheets (one buttered, one not). Repeat this a couple more times, or until you’re out of nuts. (My baklava had a total of 5 nut layers. The last layer was slightly skimpy, but whatever.)  Top with 4 more buttered phyllo sheets, ending with a buttered top. Cut a diagonal diamond pattern in the baklava into squares using a very sharp knife.  (I knew if I tried to make fancy diamond shapes, I would have an array of wildly uneven-sized pieces.  I decided to stick with straight horizontal and vertical lines.  [If you turn a square 45 degrees on a plate, you can claim it’s a diamond anyway, right?])  😉  I hope I cut all the way through to the bottom of the pan. (My knife kind of feels like it got stuck in a few places.)  Time will tell, I suppose.

Bake for 45 minutes, or until the baklava is very golden brown. (I baked mine for 30 minutes, and that seemed fine.) 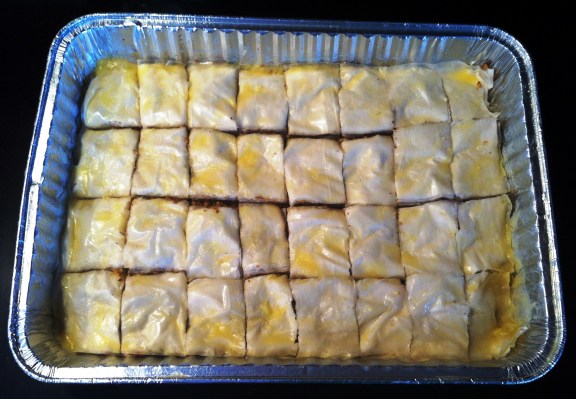 Here’s the baklava before I put it in the oven… 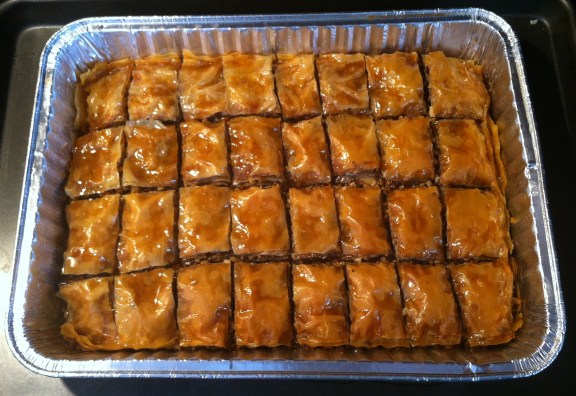 …and here it is after 30 minutes of heat, all nice and golden brown.

While the baklava is baking, combine one-half stick of the butter, honey, water, sugar, and vanilla in a saucepan. (Dang, honey is heavy!  And impervious to water.  And wait – add honey and sugar to the pan?  Well no wonder people like baklava so much; it contains liquid crack!) Bring to a boil, then reduce the heat to low.  My sauce ended up simmering for 20 minutes.

When you remove the baklava from the oven, drizzle half the saucepan evenly all over the top.  (I used a half-cup measuring spoon to spread the liquid sugar over the baked baklava, allow for better control of the sauce flow and placement.)  Allow the baklava pieces to sit and absorb for a minute, then drizzle on a little more until you think everything is thoroughly moistened. I made sure to pour the sauce both over the top of each piece, as well as to saturate the area in between each of the slices.  As I poured, I noticed liquid start to drip from the pan; I guess I did cut all the way through each piece – and then some.  Oops.  Hopefully enough liquid will remain inside the pan in order to allow the baklava to set up appropriately.  I guess I’ll find out in a few hours… You’ll likely have some of the honey mixture leftover, which you can drink with a straw. Just kidding. Nope, no leftover sauce for me.  I used it all – and a good thing, too, since a portion of it oozed out of the pan, anyway.  [Had I been thinking, I would have set the punctured pan inside another pan to contain the sauce.  But my mind didn’t consider that option until hours later.  *Sigh*.]

Allow the baklava to cool, uncovered, for several hours. Done.  Once cool and sticky and divine, carefully remove them from the pan and serve with coffee (or give as gifts!)

After dinner this evening, my sweetie and I each tried a piece of the freshly made baklava. 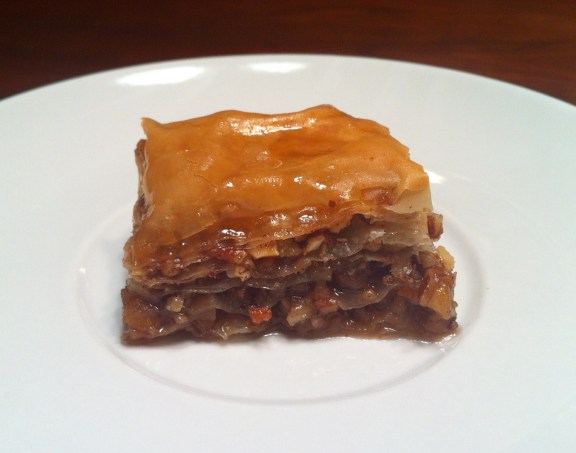 The top layer was crunchy (yay), but separated too easily from the rest of the piece (boo).  But the remainder of the piece of baklava was fantastic.  It was sweet, but not cloyingly so.  It was certainly jam packed with nuts, yet also balanced with just the right amount of phyllo dough.  As I chomped through the small serving, I could tell that the bottom layer was too thin – so eating the piece was a slightly messier endeavor than it needed to be.  But it was still very, very tasty.  My husband agreed with my assessment, but also noted that he would like to eat his piece with vanilla ice cream next time.  Um, okay… (I think Greek people might take offense to that, but whatever.  Do what you want.  Fine by me.)  I chose to drink a cup of coffee along side my piece of baklava, and the pairing was perfect.

After I cleaned up the dinner dishes, I removed four pieces of baklava from the pan and placed them in a small container.  These are the pieces that will stay in our house; the remaining 26 pieces are going home with my friend, a woman with a husband and two boys.  She and the men in her life should have no problem polishing off the rest of the sweet treat.  If the entire pan of baklava stayed in my house, I fear that I might have eaten it all.  Within a day.

I’m confidently deeming today’s baklava endeavor a big success.  I now know that I am capable of making very tasty baklava, and that creating such a complex-looking dish is not nearly as difficult as I once believed it to be.  I love adding new skills to my repertoire; and I think my mom would be pleased with my efforts, too.

P.S. For anyone who is curious, here is the nutritional info for a single piece of baklava (assuming that the pan is cut into 32 pieces).  185 calories, 13 g fat, 18 g carbohydrate, 1.5 g fiber, 11.5 g sugar, 2 g protein.  Not the healthiest thing on the planet, but definitely tasty!