#52: Experience a new style of yoga

If you have been reading this blog (or my daily delights one) for a while, you probably know that I’m a big fan of yoga.  I experimented with yoga during my late 20s/early 30s, then started getting serious about it back in 2008-2009.  I even completed a year-long yoga teacher training program, with the sole objective of learning more about this path that I felt increasingly drawn to.  (If you would like to read more about my formal yoga training experience, I wrote a blog as I went through the process. [Of course I did.])  I love yoga so much that I wake up between 4-4:30 am every day (including weekends and holidays) to make sure I squeeze in some practice before my day gets busy.  I don’t belong to a gym, but do attend a yoga studio twice a week so that I can twist my body into crazy poses during each make-my-arms-shake-turn-my-legs-to-jelly-flip-my-feet-over-my-head-twist-my-spine-around-its-axis-I-am-having-so-much-freaking-fun class.  Yup, I’m a big fan of yoga.

I have my favorite types of classes (I’m a sucker for Ashtanga-influenced vinyasa classes, and am coming to like Jivamukti sessions more and more) but I’m also open to trying new styles of yoga, too.  (The Table of Contents on my yoga teacher training blog lists out a variety of yoga styles I sampled during that year; since then I’ve also tried Bikram yoga [the crazy-hot kind].)  While I have taken at least one class in 90% of the ‘standard’ yoga styles taught in most studios, there are still some niche types of practice that I haven’t tried – and during this time of exploration, I wanted to make sure I sampled at least one of them.  Enter aerial yoga.

In addition to offering amazing yoga instruction for practitioners of all levels (from beginners who literally cannot touch their toes to advanced students who can literally put their feet behind their head), the studio I attend also offers a variety of unique yoga experiences.  Yoga on horseback?  No problem, they do that.  Yoga on a tightrope (called a “slack line”)?  Yup, they do that, too.  Yoga for pregnant ladies, yoga for moms with new babies, yoga for kids, yoga for teens, yoga for overweight people, yoga for athletes, yoga for people with injuries, yoga and music, yoga and poetry, yoga with your spouse, yoga with your dog – this studio does it all.  They’re fantastic.  (I really can’t say enough good things about the studio.  But I digress…)

So when it came time for me to complete #52 on the 101 list, my only ‘problem’ was deciding which unique experience I wanted to try.  Since I had never seen aerial yoga offered anywhere else, that’s the one I chose.

This past weekend, I got to spend two hours at the studio playing with nine other yogis, climbing in and swinging on massive silk slings, exploring the concept of aerial yoga.

It’s been a long time since I have walked into a yoga class and not known at least a little bit of what to expect.  But with this aerial yoga session, I was truly starting near zero.  I didn’t even know simple things, like should I roll my mat out for this class?  (Yes.)  How does a person get into the sling?  (It’s not as difficult as it seems.)  Everything was new to me – and this experience was a good reminder of what it feels like to be a beginner.  For a few moments, I got to experience the uncertainty that new people feel.  It was uncomfortable, but also healthy for me.

Once the class began, one of the first things the teacher had us do was put the fabric sling around our back, and begin to lean into the material.  If we were going to use the sling effectively, we had to trust that it would hold our weight and support our bodies.  I’ll admit that I felt slightly nervous the first time I leaned back, picked my feet up off the ground, and allowed the sling to hold me – but I got over that mild fear very quickly.  (Like, within two seconds.)  As I leaned back into the sling, I felt like I was on some sort of crazy yogic swing – it was so fun to twirl all around in the fabric.

There were two primary ways we used the sling in the session: with the material ‘folded over’ itself so that it was like a thick rope that helped support various parts of our bodies (our backs, our hips, a leg, etc.), and with the material fully extended so that it was like a mega hammock that we extended completely into.  (Imagine standing nice and tall.  Then raise your arms above your head and stand on your tip toes, making your body as long as possible.  Now fall straight backwards into a huge piece of silk.  Now imagine someone takes the two sides of the silk and pulls them up like handles on a plastic grocery bag – and you are the produce that is in the middle of it.  Suspend the ‘bag’ (silk) from the ceiling, and voila – you have a visual of what being in the sling was like.) 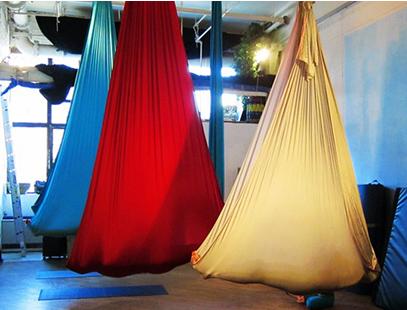 I was not a fan of using the sling via method #1 (i.e., sling-as-rope) – the pressure of the bunched-up silk was very uncomfortable on my body wherever it made contact (it was almost painful), and I felt more restricted than if I were moving on my own, ‘unaided’ by the prop.  (Granted, I am a very flexible woman, so I suspect people who may be less flexible might find the sling to be very helpful for moving their bodies in ways they might not be able to access otherwise.)  But sling method #2 (i.e., sling as hammock/grocery bag), now that was a different story.  As we each laid back into our fully-extended slings, the teacher had us bend sideways.  (I.e., lay on the floor with your arms over your head, so that you are stretched out as long as possible.  Now, keeping your back on the floor, try to bend so that your fingertips touch your toes – so you’ll be curling into a letter “C”.)  When I did this, it felt like I was swimming in air – it was such a unique, cool, interesting sensation.

However, when I transitioned out of the sling and on to the mat to do a standard sun salutation (a series of twelve basic yoga poses connected via continuous movement and a specific breath pattern), my body felt freakishly heavy.  It was as if my bones weighed 300 pounds; movements that are normally very easy for me to do suddenly felt taxing and laborious, like I was pushing a huge fat ass through mud.  I did not like the sensation at all.

Later in the class, the teacher had us play with inversions on the sling.  (I.e., poses where we turn our bodies upside down, so that our heads are near the floor and our feet are near the ceiling.)  In normal yoga classes, I am a HUGE fan of inversions – I absolutely adore handstands, headstands, forearm stands, and on and on.  But with the sling, the inversions didn’t feel good – I became very light-headed, and very space-cadet-y.  (For fellow yogis: the sling felt very vata-y.  I have a strong vata dosha anyway, so to add a lot more vata to my practice is rarely a good idea; I need a solid dose of grounding in each class I take, and the sling seemed to offer zero grounding properties.)  So the poses that I usually love suddenly became almost aversive to me; again, another strange experience to encounter.

Indeed, when I tried to follow the teacher’s instructions for much of the class, it was hard for me to do; it was as if I was a complete yoga-novice.  (Suffice to say, I didn’t like this feeling very much.)  But.  When the instructor gave us “play time” (where we simply used the sling in any way we wanted to), all of the poses and movements came to me very easily.  My body knew what it wanted (and at times, needed) to do; all I had to do was listen.  I had to take the practice out of my mental memory and trust my muscle memory; and when I did that, I was back to being a competent, confident yogi.

At the end of the session, the instructor gave us the option to take our savasana (final resting pose) either on the ground or in the sling – and every student chose to relax in the sling.  As I laid back and felt (and saw) the huge red swath of silk support me, a sensation of calm literally surrounded me.  At precisely that moment, the sounds of chanting and singing from a class occurring in the room across the hall entered our space – and I ended the session with all of my senses surrounded by feelings of relaxation.  It was lovely.

I don’t think I’ll take another aerial yoga class any time soon; but boy, I could totally go for one of those slings in my house.  I’d love to take a swim in the air again.

P.S.  Below are some pictures from the class that a very kind fellow student took for me.  (Thank you kind gal, wherever you are.)  [And no, I intentionally didn’t ask her to take them in shadow; that’s just the way the lighting worked out.]

12 Responses to #52: Experience a new style of yoga