In my quest to learn more about my adopted home city, yesterday I visited another local historic site: the Alexander Ramsey House.  The afternoon was gray, rainy, and unseasonably chilly. 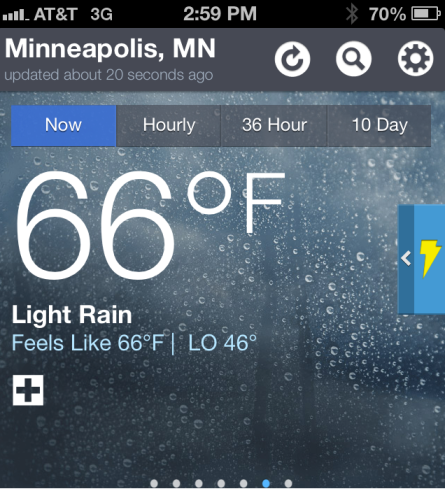 I seem to have a knack for scheduling myself for museum events on dreary days.  (Which is quite a skill, I must say.  If only I could figure out a way to market it…)  🙂  But I digress.  Back to the task at hand: history.

The Alexander Ramsey House is the Victorian-styled home of Minnesota’s first territorial governor (and his family).  While the Ramsey House website claims that the home is open to visitors year-round, that statement is only partially correct.  Yes, the house is available for viewing every month of the year – but the only way to see the house is via a formal tour.  I’m not a huge fan of structured, scripted (read: regimented) experiences when it comes to exploring and casual learning, but in this instance, I didn’t really have a choice: if I wanted to see the house, I would have to do so by participating in a tour.  Sigh.  Okay, here we go…

The tour group I was assigned to consisted of seven other visitors plus one guide.  We began the experience by looking at the Ramsey family tree – which is a very small, concise lineage:

At the bottom of the tree is Alexander Ramsey and his wife; they had three children, only one of whom lived to be an adult. She got married and had four children (three of whom survived to adulthood) – but none of those children had any kids. So ends the Ramsey family legacy.

After a rocky start (the tour guide left much to be desired – but I’ll spare everyone a detailed description of the issues I had with him), our group proceeded to walk from the gift shop (where the tour began [of course]) to the main property.

As we approached the front door of the house, the tour guide informed us that we wouldn’t be able to take pictures, “for security reasons”.  Security reasons?  Like this home is some sort of national treasure?  I found the explanation ridiculous.  Yet while I didn’t agree with this logic, I complied with the request, and slipped my camera into my purse.  Once the guide had confirmed that we had all stored our photography devices, he opened the main door of the house and we all walked into the entryway. 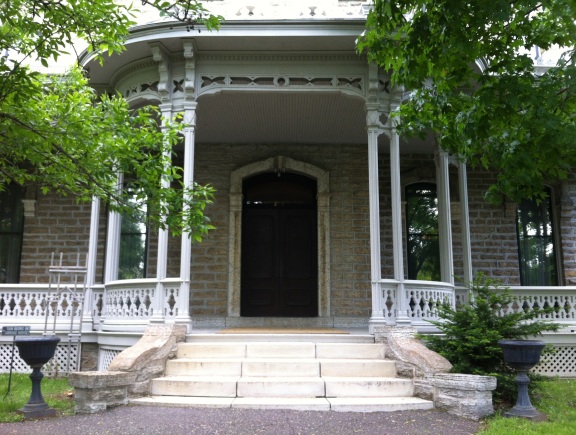 This was the only picture of the home that I was allowed to take.

The foyer of the home was quite plain.  Dark wood ran throughout the house (baseboards, floors, doorway arches, banisters, handrails along the stairs, etc.), heavy draperies lined select windows, floral wallpaper adorned a few of the primary ‘public’ spaces (i.e., the parlor, the sitting area, the dining room), and intricate pieces of furniture provided guest seating in those few guest-facing rooms; but the remainder of the home had plain painted walls, scant furniture, minimal adornments…. It’s like Alexander Ramsey wanted to put on a good show for visitors, but in his heart, he didn’t give a rip about trying to make his home lavish or opulent.  (Or else he didn’t know how to do it successfully – which may have been the case.  Ramsey came from a working-class family, so it could be that he truly didn’t know what constituted a fancy space.)  Either way, while the house tried to be super-impressive, it fell short.  The space actually reminded me a lot of the Turnblad Mansion, but with two key differences: 1) the Ramsey house felt like a lower-class version of the Turnblad Mansion, and 2) Turnblad was very clear about the intention of his home: he designed and adorned the public spaces to intentionally flaunt his wealth, and he kept the private spaces simple because he felt that his family didn’t need to be impressed by his money.  Turnblad wanted to show off for strangers and visitors, not for his wife and children who saw him every day.

As our tour migrated from the sitting area, through the library, and on to the dining room, we eventually arrived at the kitchen – which I found to be one of the most intriguing parts of the house.  The kitchen was managed by ‘the help’ – so I got to see a bit of what life was really like back in the mid-to-late 1800s.  I was fascinated by the oven and stove: the baking compartment was tiny, yet the range had six burners.  The tour guide explained that back in the 1800s, most foods were boiled instead of baked – hence the need for lots of burners, and not much oven space.  Super interesting!  I also loved seeing the cookware that was used in the 1800s – and appreciated how little of it there was.  Whereas most households today have copious amounts of pots and pans, baking sheets, cooling racks, skillets (not to mention blenders, food processors, mixers, etc.), the kitchen of this wealthy family had just four pots, two sheet pans, and a small collection of stirring spoons.  Additionally, I was fascinated by the gadgets used back then (like a very complex apple peeler), the other appliances in the space (including a first-generation freezer – and the “ICE” sign in the window that indicated how the ‘freezer’ really functioned), and the items that were protected by the family (example: the spices were housed in a locked cabinet; whenever the cook wanted to use a spice, she had to call for Mrs. Ramsey, who unlocked the cabinet and watched the cook carefully measure the spice.  Once the cook had used the spice, it went back into the cabinet and was once again locked by Mrs. Ramsey – that’s how valuable spices were back in those days!)  I was also struck by how much work it took to create a meal 150 years ago.  The contrast between life back in the 1800s and life today was most salient to me in this kitchen space.

Continuing the tour, we climbed a back staircase to the second floor of the home, and walked through the “master” bathroom – which was the size of the bathroom in my home (which is by no means impressive).  The bathroom did have a flush toilet, but it was unlike the toilets today – it looked like a basin covered with a wooden box.  (Like this):

In addition to a flush toilet, the bathroom also had a tin tub – which was absolutely tiny.  I probably could have fully extended my legs in it if I sat completely upright – but I’m only 5’4”.  Just another example of how not only the items in a home were different back in the 1800s, but the people were, too.

The guide proceeded to walk us through a few bedrooms of the family members, which were “predictable” in their appearance (big beds, fireplaces, high ceilings, heavy drapes, floral and paisley wall papers and tapestries…) – and then we arrived at one of the servant bedrooms.  The room was strikingly similar to a college dorm space: it held two twin beds, a very small dresser, and minimal floor space to navigate between these three items.  As my brain processed the differences between the family member bedroom that I just saw and the servant room that I now stood in, I began to feel (really feel) the significant differences between “the classes” – and I’ll admit that the awareness shocked me.  My intellectual brain knows that inequality has existed since the first humans populated Earth – but to feel a tiny dose of that inequality is a wholly different experience.

At this point the guide noted that while most servants shared a living space, the head cook got to have a room to herself – which just goes to show the importance that food played in the 1800s.  Many political interactions, business deals, and family celebrations occurred around a shared meal – much like they do today. While many things change over the years, others persist and stay much the same across time.

Exiting the servant quarters, our group navigated another flight of stairs and arrived at the third floor.  We were led through Ramsey’s office, then to the nursery and playroom – where the children likely spent most of their time.  Interestingly, this space held the largest number of personal artifacts: we got to see the actual dolls, books, skates, puzzles, and toys that the Ramsey children played with.  These days, most kids of middle-class parents have oodles and oodles of toys – so many that some kids honestly don’t know when one of their toys goes missing.  Yet though the Ramsey family was well above “middle class”, each child had only a few toys – I’m certain that if one of the items were broken or lost, the child would absolutely know.  Becoming aware of this simple-yet-powerful contrast, I was again struck by how different life was back in the 1800s compared to now: even very wealthy people 150 years ago had significantly fewer possessions than what ‘average’ people have today.  And if I was witnessing life for a rich family, I really can’t begin to imagine how hard life must have been for a working-class one.  I shook my head a bit at the scarcity of then compared to the excesses of now – and found myself wishing for a middle-ground for us all.

As I looked more closely at the antique toys, I realized that the items the children played with were actually training tools designed to teach them how to behave as adults.  The girls got to practice being mommies to the dolls, to learn how to throw a proper tea party, and to tend to the play house; the boys got to practice being competitive with one another in sport, and how to solve puzzles and think critically.  In seeing how clearly “classic” gender roles were being cultivated and reinforced in these children, I am genuinely amazed by the dramatic and sweeping changes that have occurred in just 150 years – and I feel such gratitude for all of the people who came before me, who toiled and fought so that I have choices that were unthinkable just a few generations ago.  Wow.

Leaving the playroom, our group walked to the end of the hallway to begin our departure from the house.  Yet before I started down the flights of stairs, I stopped at a small alcove with a floor-to-ceiling window – and saw an absolutely amazing view of the Mississippi River.  I tried to envision what the scene would have looked like back in the 1800s, when the land was still wild and green – and I smiled for the first time.

Despite my issues with some of the people on the tour, I did learn quite a lot through this experience.  I can’t say that I would strongly encourage others to visit this particular site (I think there are more enjoyable things individuals can do in the city), but overall I am glad that I completed this task.  I gained new awareness and perspective on many different facets of life (culture, class, gender roles), reinforced the appreciation and gratitude I have for my own life (particularly that I was born in a place and at a time where I am truly free to live however I want to), and made progress towards completing my 101 list.  Not bad for a 75-minute tour.