As I flipped through nearly 50 pages of class offerings, I forced myself to be selective and refrain from signing up for every single class that looked interesting.  (I have a tendency to go to extremes…)  One session I hadn’t seen offered before was titled “Weird Foods,” and the class description read, “Looking to add some mystery to your Halloween party or always wondered about some of those strange-looking foods in the grocery store? Mrs. C, Registered Dietitian for [one of the local grocery stores], will introduce many foods that you’ve never tried… or maybe even heard of!”  Ooohh, mysterious.  My curiosity was definitely piqued.  So this past Tuesday evening I headed to one of the regional libraries, prepared to learn about bizarre grub.

I wasn’t sure who all might attend the session; I mean, what type of person likes to hang out at the library on a Tuesday evening?  I consider myself semi “normal”, but I know that this behavior isn’t exactly commonplace for most folks… When I arrived at the meeting room, I was surprised to see 18 other people in attendance – and was delighted to discover that all of them were rather “mainstream” individuals!  🙂  Looks like I have more company than I thought.

Of the 19 total participants, only two were men.  All of us were white, but our ages ran the spectrum from mid-20s to late-70s, with a pretty even distribution of ages across all decades.  The librarian who organized the event was a personable-yet-slightly-shy gal in her early 30s, and the dietician who led the class (Mrs. C) was a gregarious woman in her late 40s. Mrs. C structured the class so that we spent 20 minutes talking about (and experiencing) healthy-but-weird foods, 20 minutes speculating about (and tentatively sampling) strange-to-Americans foods, 10 minutes discussing how to make healthy food selections (she had to sneak in some “real” education, after all), and 10 minutes answering questions.  Most of the foods smelled and/or looked absolutely vile to me, so I didn’t consume anything that was served – but I did enjoy learning about how some crazy foods came to exist.  So without further adieu, here is a guided walk through of an evening of Weird Foods.

Kombucha is tea (usually black, though sometimes green is used) that has been sweetened (and sometimes flavored), then fermented with bacteria and yeast.  Often times a bottle of kombucha looks like it has strands of thin filament in it; those are the healthy bacteria.  When novices see the strands in their beverage bottle they sometimes shake it to help re-distribute the “sediment”; but bear in mind that the beverage is fermented, so when agitated, the liquid releases more gas.  Mrs. C said that she has seen more than one person wear a bottle of kombucha shortly after exiting the grocery store check-out line.  🙂  Each participant in this evening’s session was served a small shot-glass of raspberry kombucha, but I couldn’t get past the funky, funky smell – so I politely handed my sample to the woman next to me.

Kefir is milk (usually from either a cow, goat, or sheep) that has been fermented with bacteria and yeast.  Similar to kombucha, kefir is touted for its high quantity of probiotic bacteria.  Fun fact: In the old days, traditional kefir was made in animal skin bags that were hung near a doorway; the bag would be knocked by anyone passing through the doorway, which helped keep the milk and kefir grains well mixed.  I’ve had kefir before; it toes the line between a glass of very thick milk and a very thin smoothie. 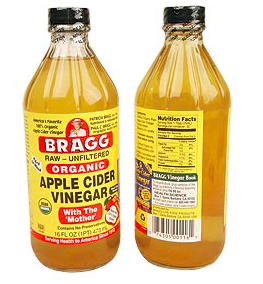 Braggs is a common brand among the very-healthy-eating set; I’ve been a fan of their liquid aminos for several years now.  (I splash a bit of it in a salad; super tasty!)  I’ve never had their apple cider vinegar, though, as I’m not a big consumer of vinegar in general.  This product is apple cider that has been – yup, you guessed it – fermented with bacteria and yeast.  The end result is a HIGHLY acidic liquid that is purposed to boost immunity, remove toxins, improve digestion, soothe sore joints and muscles… Mrs. C polled the class to see who consumes this product regularly, infrequently, or not at all.  Most of us were in the “not at all” camp, but one older gentleman said that he takes a tablespoon straight whenever he feels queasy.  Mrs. C raised her eyebrows immediately, and sternly said, “You should never take this vinegar straight – it is over 5% acidity, and will absolutely remove the enamel from your teeth.  Always drink this vinegar diluted in at least 4 ounces of water.”  So if any of you are considering trying this tincture, you have been warned.

Chia seeds are seeds from a flowering plant native in Mexico and Guatemala.  They are a whole grain, and are incredibly high in omega-3 fats as well as fiber.  This food made the “weird” list because when put into liquid, chia absorbs up to 12 times its own weight, producing a semi-slimy “gel”.  If you follow my food blog, you may remember the chocolate-chia-pudding experimental recipe I tried; the texture was a little strange.  Good, but strange. 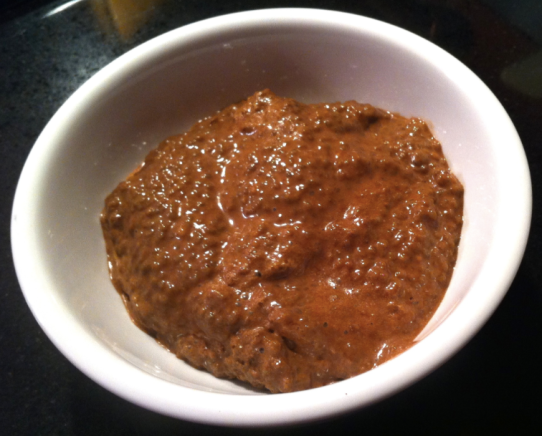 Mrs. C then transitioned from healthy-but-weird foods to strange-to-Americans products, and started off with “digestive biscuits” mostly because they have a strange name.  In truth, these British “biscuits” are a vanilla-and-baking soda cookie.  I’ve had digestives many times before, and am a fan when I want a dessert that is crunchy but not overly sweet.  Interestingly, four of the participants in the class were from England; so they spent a minute or so reminiscing about all the digestives they ate when they were kids.

Another selection from across the pond, sponge pudding is not as tasty as the name might imply.  (I learned this harsh lesson many years ago when I found out what “black pudding” was.  Expecting a decadent dark chocolate dessert with a silky texture, imagine my shock when I found out that black pudding is actually sausage where blood is the main ingredient!  Holy hell.)  Sponge pudding (which the Brits told us is usually called “spotted dick” [I know, I know, snicker all you need to…]) is a very dense cake made with flour, milk, brown sugar, raisins, currants, spices, and… suet.  Ugh.  Mrs. C served the cake straight from the can – and the Brits let her know that sponge pudding is usually served with yellow custard poured over the top, because otherwise the cake is incredibly dry.  Noted.

A dairy product made by cooking cow’s milk low and slow (usually via steam or a water bath), then leaving the heated milk in a pan to cool slowly.  During the cooling period, the denser liquid sinks to the bottom of the container and the thick cream rises to the top, forming “clots”.  The resulting “cream” is over two-thirds fat; most Americans would classify it more as butter than cream. 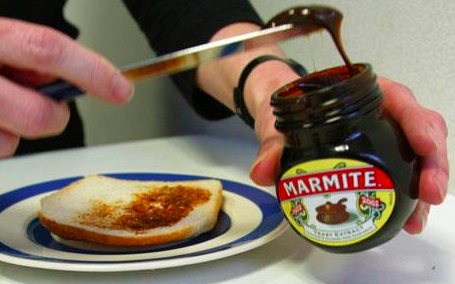 Mrs. C described marmite as “yeast sludge that is leftover from brewing beer that is then treated with salt and vitamins.”  Appetizing, non?  The stuff looked like really thick motor oil, and smelled vile.  I politely passed on the cracker slathered with the stuff, choosing to instead watch the humorous reactions of my fellow class participants.  The Brits ate their cracker with a smile; the rest of the folks, not so much.  Interestingly, two women from Australia were also in the class, and they got into a good-natured debate with the Brits about the superiority of vegemite over marmite.

This was the one food that Mrs. C showed overt prejudice against.  Gelatin is a powder derived from boiling animal skin, bones, and connective tissue; when added to a liquid, the powder congeals and forms a gel.  Gelatin is used in everything from Jello to gummy bears to marshmallows, and thousands of products in between. Mrs. C said that she finds gelatin absolutely appalling, as it has zero nutritional benefits.  (Um, not to mention that it comes from the bones and skin of dead animals…)

This was one food I had never even heard of!  Another British selection, I learned that piccalilli is a condiment best described as a mustard/vegetable/relish hybrid.  Ingredients include vinegar, turmeric, and mustard powder (i.e., the mustard elements), as well as vinegar, cauliflower, onions, cucumbers, and capers (the relish grouping).  The ingredients are cooked, then jarred; the end result looks like a very chunky yellow mustard. Interesting…. 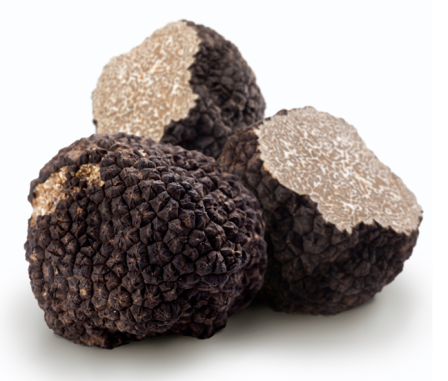 Mrs. C thought she was giving us an indulgent treat by offering us a small crostini slathered with truffle pâté.  However, I tried truffle oil for the first time earlier this year (after reading Tim Ferris rave about the near-orgasmic experience he had when consuming a dish of avocado, egg, salt, and truffle oil) – and the three tiny drops of truffle oil I dribbled on the food completely destroyed all tastiness of the meal for me.  I did sniff the pâté offered in the class – and yup, it smelled exactly like the gross truffle oil did.  So if any of you adore truffle oil and you want a nearly-new bottle of the stuff, let me know.  🙂 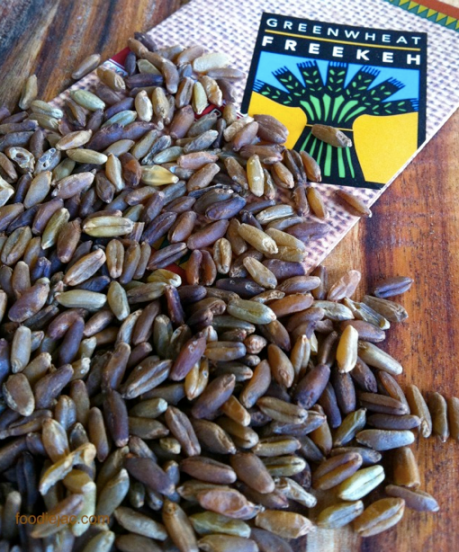 Another food I had never heard of before, greenwheat freekeh is very young (and therefore moist) wheat that is burned; the fire removes the exterior of the wheat, but because the grain is damp when harvested, the seeds remain even after the burning – and those seeds are what greenwheat freekeh is.  Hmm.

Mrs. C passed around a package of greenwheat freekeh for us to look at, and I was impressed by the nutritional composition of this grain.  It’s decent in protein and fiber, and has no natural sugars in it.  Nice.

Seeing as how we live in the state where SPAM was born, it was only fitting that Mrs. C ended the food section of the class with a review of all the different permutations of SPAM offered by the grocery store.  Currently on the shelves at the local market are: hickory SPAM, black pepper SPAM, turkey SPAM, jalapejno SPAM, sandwich-spread style SPAM, 25% less sodium SPAM (for people looking to be healthy while still eating SPAM?), SPAM singles (for the SPAM eater on the go), and of course, the one that started them all, classic SPAM.  Need I say anything more?

Any self-respecting dietician couldn’t end an educational class with a parade of SPAM; so in the final few minutes of our session, Mrs. C provided an overview of the NuVal nutrition rating system recently introduced in her employer’s stores.  The concept is pretty cool: a computer algorithm analyzes over 30 different nutrient and nutrition factors in a food item (as well as the effects of each of those factors on health outcomes), and assigns a score from 1-100.  The higher the score, the healthier the food.

Intrigued?  Here are more details about the science behind the NuVal system; and if you don’t desire that level of detail, here is some more general info.

Having fulfilled her professional duty to give us some positive, healthy information in addition to all of the “mental candy” she fed our brains, Mrs. C ended the weird foods class right on time.  I left full of interesting new facts – but no new items for my grocery list.  But that’s quite okay.  🙂