Before my husband and I got married, we took our relationship on a few “test drives” to see how we might fare when the novelty of romantic infatuation waned (as it always inevitably does).  One of the best ways to learn about another human is to travel with them – and within the first year of our courtship, my husband and I traveled to meet his parents, my parents, and a few siblings and other family members.  One such trip took us to Madison, WI, where my husband’s older brother was finishing up a PhD (or maybe his post-doc; I’m not sure…), as well as learning the ropes as a new dad.

During our weekend in their apartment, my future brother- and sister-in-law treated my then-boyfriend (now husband) and I to several terrific home-cooked meals.  One dish involved chicken (I ate meat back then) seasoned with incredible flavors that were new to me.  When I inquired about the food, my now-sister-in-law disclosed that the meal was incredibly easy to pull together; the seasoning was a spice blend from Penzeys.

At the time, I had no idea what Penzeys was.  Some special store brand sold in Madison?  A local artisan spice manufacturer?  A specialty food store?  Turns out that Penzeys is a bit of a mix of all three – it’s a specialty store that focuses on distributing high-quality spices, as well as creating unique spice blends.  They began as a local shop in Wauwatosa, Wisconsin, but now have multiple locations in 29 states.  I was intrigued to learn more about this “Penzeys” place, but my then-boyfriend/now-husband and I chose to focus our limited time with his brother’s new baby son instead of going shopping.  (I still stand by this decision.)  😉  I figured I could check out Penzeys some other time.

Yet, over a decade later, I still haven’t gotten my rear in gear to make a brief drive across town and explore the special spice store.  Why?  I’m not sure.  Part of the issue is laziness, I’m quite certain.  Another likely reason is that I seem to always be able to find some other way to fill my time.  Additionally, some part of me felt like I never had a ‘real’ purpose for shopping for spices.  I mean, if I need cinnamon or oregano, I can pick up those items at my local grocery store.  Why drive all the way across town to get something I can purchase so close to home?

Well. This weekend, each of those factors was challenged: I got motivated, realized I had a block of open time on my schedule, and found myself so utterly bored with my usual meals that I desperately needed something to make them novel again.  Finally, 14 years (!) after I first learned of Penzeys, I got my butt in my car and made my way to the shop.

After a challenging two-block walk pushing against 30 mph winter wind, I stepped into the cheery, bright, country-esque space – and felt like I had walked into a rural Indiana neighbor’s home.  It was quite a lovely feeling, actually.

The store was divided into small ‘shops’ – sections of the store focused on a particular theme.  I could describe each of these shops to you – but I think in this case, photos will be much more effective (and enjoyable) than words.  So I present to you a fun little ‘virtual’ tour of Penzeys:

The very first section I saw was dedicated to pepper. I found this to be rather strange… 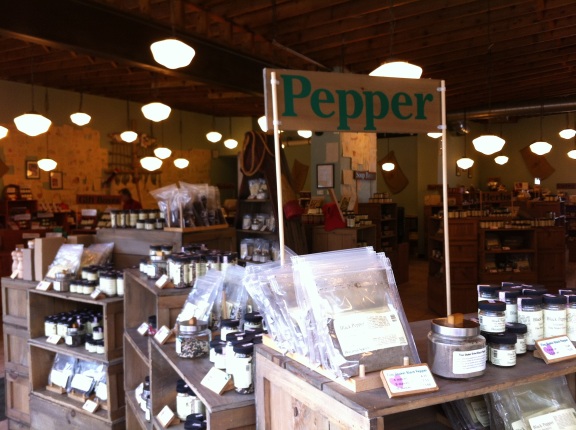 Once I got closer to the shelves in the pepper section, I realized there is quite a variety of peppers available.  White, black, green, pink, whole, cracked, ground… I had no idea pepper was so complex! 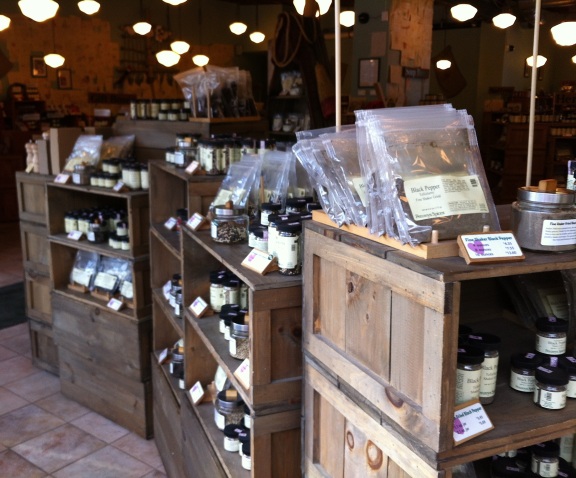 Look at all that pepper.

Continuing in a counter-clockwise path along the store, the next area I walked into was the Baking section:

This area had everything from cocoa powder to vanilla beans, from almond extract to lemon peel: 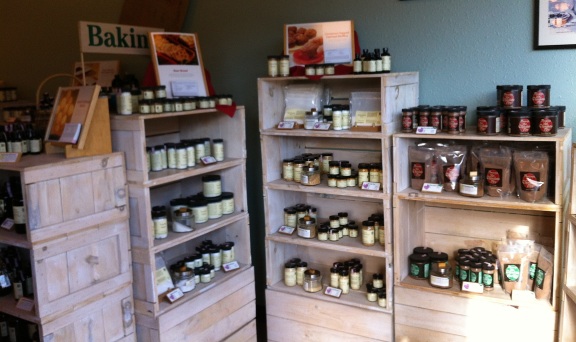 Apparently an important element in baking is cinnamon; so much so that this power spice had its own dedicated section!  (Just like her friend Mr. Pepper.) 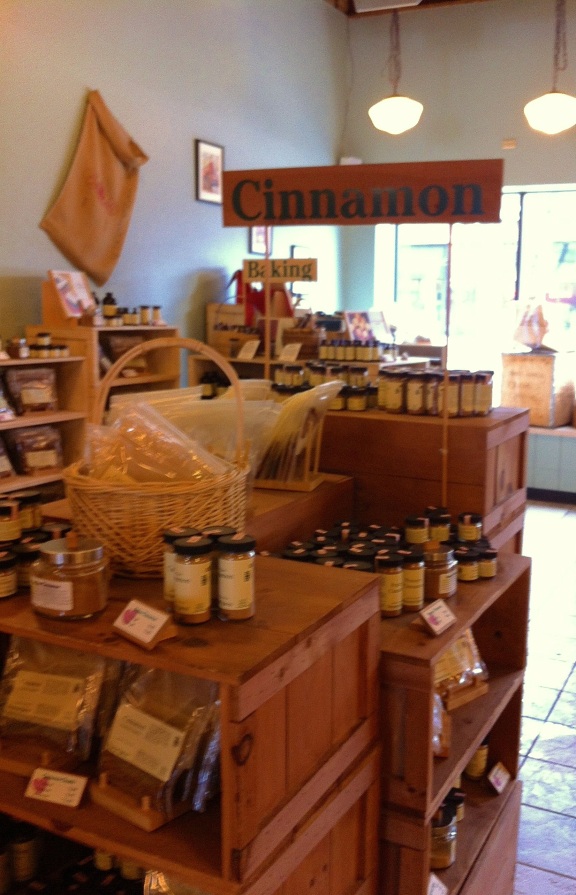 Is cinnamon “above” associating with other baking spices? C’mon cinnamon, don’t get uppity…

The next section was also dedicated to a sole ingredient; but this item definitely merits its own special space on the sales floor.  Wars have been waged on behalf of it, after all.  I’m talking about NaCl.  (Aka ‘salt’ for any non-chemists in the house.) 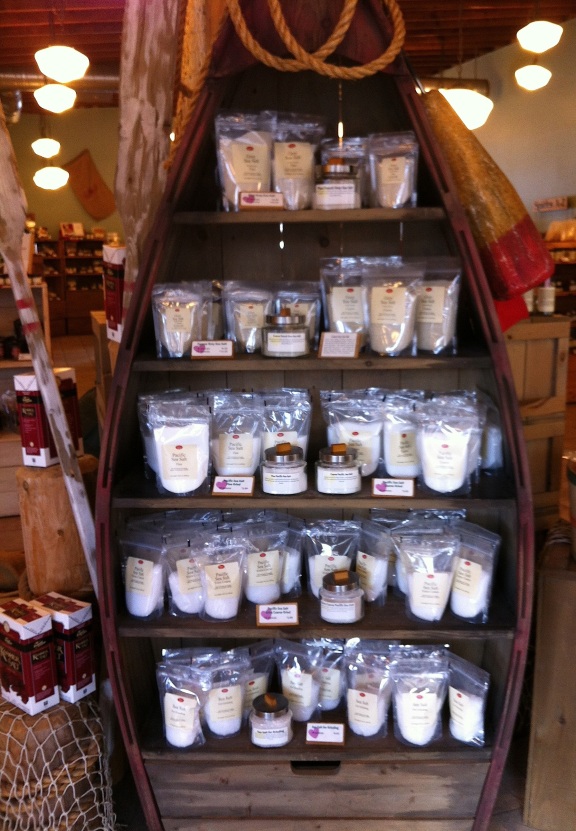 After a lot of homogenous displays, I was happy that the next section I approached was rich in diversity; I entered the land of “Seasonings.”

Every spice and seasoning blend had a sample jar that customers could open in order to see/feel/smell the product (and taste it, I suppose, if a person didn’t mind the billions of germs that surely lived amid spices that thousands of other people had put their noses up in to… But I digress).  I found that sniffing unknown items really helped me determine if I might like them.

J A, this one’s for you! I’m not a big fan of garlic, so I passed on this option; but I did think about you enjoying it on a bagel with cream cheese and sliced tomato. 🙂

Dad, of course I thought of you when I sniffed this. (After I stopped coughing, that is…)

After smelling every new-to-me seasoning, I performed the same actions in the Herbs section: 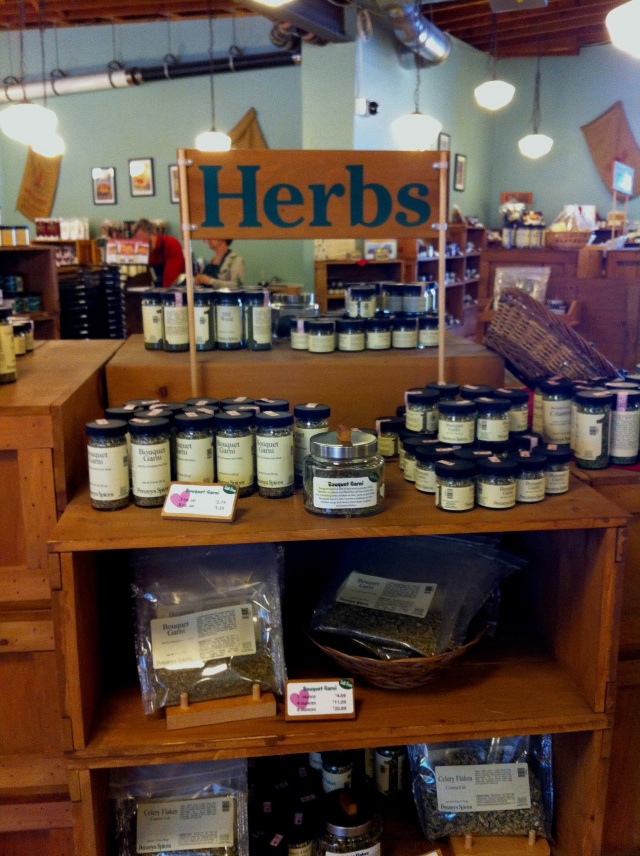 And again in the Spices area: 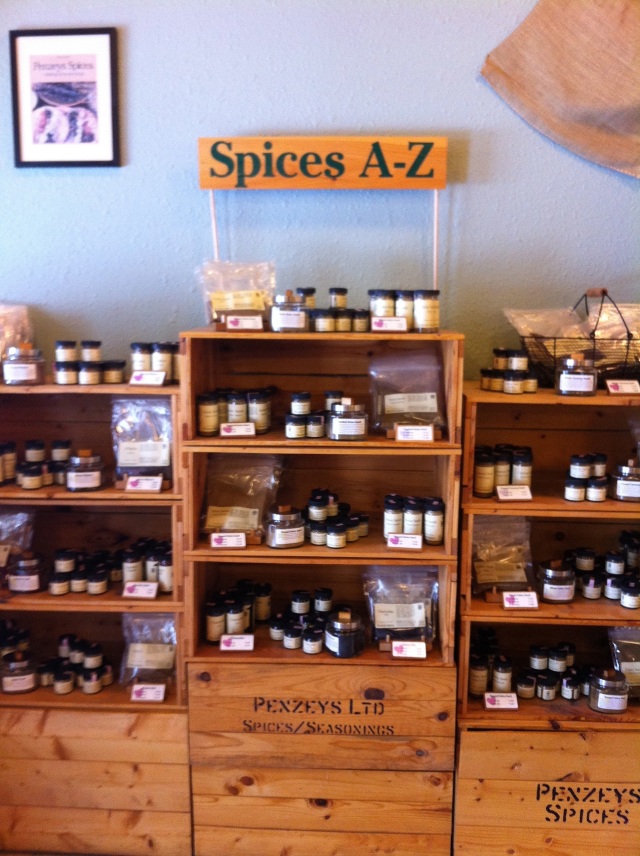 Which got me thinking: What’s the difference between a seasoning, an herb, and a spice?  (The question intrigued me so much that I actually researched it; I discovered that a spice comes from the bark, root, stem, seed or fruit of a plant, an herb is from the leaves of a plant, and a seasoning is anything that flavors food [like salt].  Thanks for the info Maraline!)

After leaving the land of spices, I discovered another set of mini-shops within the store.  Each of these sections was focused on more comprehensive foods and/or ‘giftable’ items, such as: 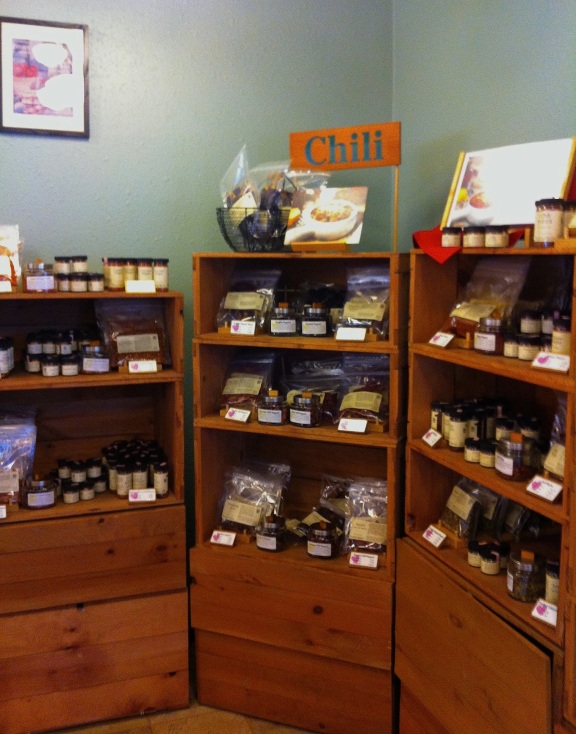 These ingredients help anyone make a pot of chili to the level of their heat tolerance/liking. [I’m a super-mild gal.]

Likely a tastier alternative to bouillon. 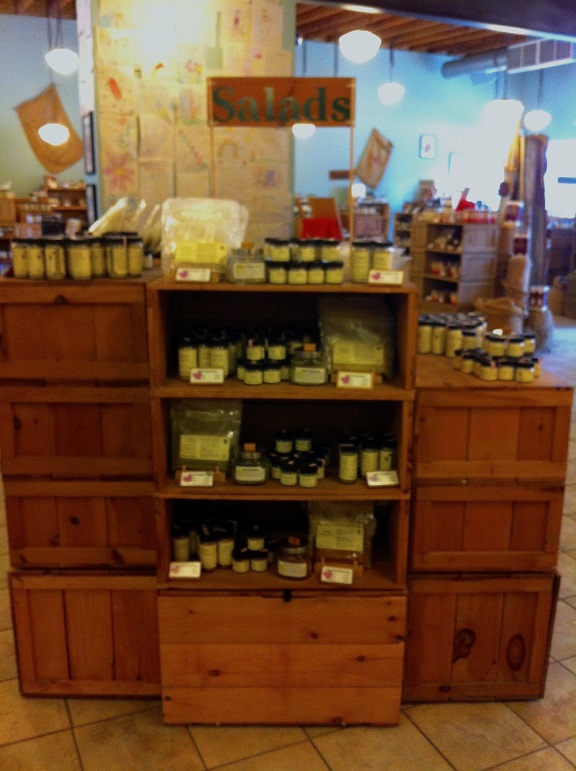 This section was kind of crazy. They had blends labeled “Buttermilk Ranch”, “French Vinaigrette”, “Green Goddess”… and each one smelled exactly like the way the item usually tastes! Forget Hidden Valley (and all of their artificial ingredients) – hello Penzeys!

And last, but certainly not least, gift boxes: 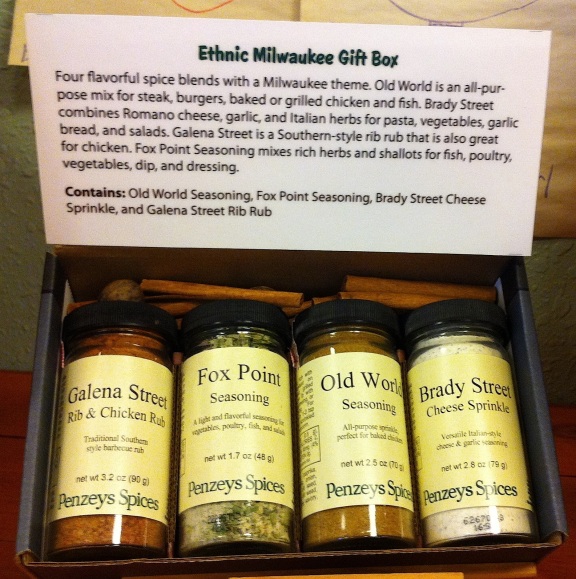 I had no idea Milwaukee was a specially designated ethnic group…

The variety of gift boxes on display was quite unique; Penzeys offered everything from interesting flavor combinations like Salad (see picture above for some ideas), Curry, Cheese, Extracts… to more occasion/recipient-specific boxes like Spicy Wedding, Cocoa Lovers, Baker’s Assortment, Grill and Boil, Taste of Mexico, Salt Free…

Once I finished my exploratory walk around the store, I made a second circle, selecting a few key items to purchase.  I limited myself to spices/seasonings/herbs that I likely wouldn’t be able to purchase anywhere else; and at the end of this tour of Penzeys, I returned home with:

Each of these spice/seasoning blends (apart from the salt) smelled absolutely fantastic in the store – but the real test was yet to come. Of course, I’m talking about taste.

The first item I tore into was the salt.  After reading The Four Hour Chef last year, I realized the importance that high-quality salt can make in enhancing the flavor of food.  As a result, I promptly ordered the primary brand of salt that Tim recommended in his book – and I was not disappointed.  But I recently ran out of my last box of that seasoning, so when I was in Penzeys I asked one of the store clerks what salt he recommended.  He pointed me towards the Gray Sea Salt – and when I saw it was from France, I was sold.  🙂

The packaging noted that the salt was a tiny bit damp to the touch, and had a slight floral scent.  As I picked up the first grains with my fingers, I did note that the salt felt a wee bit like moist sand.  I sprinkled a healthy portion of the seasoning onto my food (sautéed broccoli), and took a bite.  As the veggie approached my lips, I actually did smell the tiniest hint of a floral note, which really surprised me (as I’m not a fancy foodie who can detect notes of cinnamon amid the mole sauce).  Encouraged, I began chewing the broccoli – but found that the salt tasted just like regular old Morton’s.  Which isn’t “bad” (it is salt, after all), but this Penzey product pales in comparison to Maldon’s.  Lesson learned.

The next evening, I decided to crack open the “BBQ 3001” blend.  As I started to twist the lid, I noticed something small-yet-special:

The lid of every Penzey’s spice container is marked with this lovely safety seal.

The full message is “Love to Cook – Cook to Love.”

Aw… I love it when manufacturers use product space in creative ways.

I added a liberal sprinkling of the blend to a mock-chili I had thrown together, and was surprised by the first bite.  I tasted a lot of what I consider non-standard BBQ spices: cinnamon, vanilla, nutmeg.  It was as if my chili had cookie crumbles in it; it was bizarre, and rather unpleasant.  But instead of abandoning the meal and starting over, I decided to add some salt to it – and that one action completely transformed the flavor profile.  The dish went from sweet to savory, and the seasoning blend became a cohesive BBQ flavor.  With a few grains of salt, the smoke, pepper, and mustard seasonings in the “3001” blend came through – and my meal became a savory chili delight.  Wild!  Almost magical.

Feeling encouraged, the next day I experimented further, and combined 1/4 teaspoon of the Pizza Seasoning with 1/4 cup of regular tomato sauce to see if I could make pizza sauce.  As the mixture cooked (in a microwave for 60 seconds), it absolutely smelled like pizza!  But my nose has been fooled before; could my tongue be convinced that this duct-tape-and-string concoction fill the role of a suitable pizza sauce? The answer: Totally.  This mixture tasted like a slightly spicy pizza sauce.  Wow – what a cool trick!

I have yet to open and use the Singapore Seasoning, so at this time I can’t report on my experience with that blend.  But, if you are eagerly anticipating my riveting review of this flavor encounter (that’s a little sarcasm for ya), let me know in the comments, and I’ll whip up a quick dish so I can add a P.S. to the bottom of this post.

Otherwise – this has been my full experience with task #71.  I have to admit, it was a lot more fun than I expected it to be!