Beyond 101: Attend the World Series of Poker

Yesterday my sweetie helped me complete #53 on my 101 list (to see a Las Vegas show). Since we spent the bulk of that day doing things on my agenda, I wanted to give my sweetie the opportunity to direct our activities for our second day in the city. After a few rounds of Mississippi Stud (a poker variant) [where my sweetie took $140 from the house – woot!] and a leisurely lunch at one of his favorite Vegas restaurants, we took a shuttle bus to the Rio to seek out the World Series of Poker.

My sweetie is a big poker fan, and has been playing it for over a decade. But in the past several years he has gotten more ‘serious’ about the game – to the point where he has not only read books about poker strategy, but has successfully applied his knowledge to local cash games. Indeed, he earned enough money from those “friendly games” to fund complete trips to Las Vegas. (Trips, as in plural, as in more than one…) Upon arriving in the Vegas poker rooms, my sweetie discovered that he can hold his own among the various individuals who show up at the table – he’s got some skills. (Of course he does.) 🙂

Back in his early learning days, part of his training to better understand how professional players approach the game included watching old episodes of the World Series of Poker (WSOP). These days, my sweetie maintains a level of “ongoing education” (to acquire information about more nuanced poker strategy) by continuing to watch old WSOP broadcasts and events.

This visit to Las Vegas happened to coincide with the first few days of the WSOP tournament, so it was a cool opportunity for my sweetie to get to experience something live that he had only seen on TV. And as the WSOP is often present in our living room back home, I have seen many episodes from the series as well. The WSOP casually intrigues me; while I wouldn’t make a special trip to the event and attend as a spectator, I would happily integrate a visit into existing travel plans to see what the experience was all about – so that’s precisely what my sweetie and I did.

Once my sweetie and I (and another couple who came with us on this leg of our Vegas excursion) arrived at the Rio, we had a slightly difficult time finding the WSOP. I wasn’t quite sure what to expect, but I guess in my mind I imagined that the WSOP tables would be right in the middle of the casino. In reality, we had to walk a good 10 minutes away from the casino in order to locate the WSOP. But once we arrived, I understood why the series simply could not take place on the main floor of the casino. The turnout for this event was HUGE.

For some reason, I thought that a few hundred people participated in the WSOP. (After all, the event does carry a $10,000 entrance fee.) Um, no. In reality, thousands of people enter this competition. THOUSANDS. Last year, 6700 people paid the entrance fee and participated in Day 1 tournament play. Holy buckets. No wonder the WSOP games had to occur in a space separate from the casino’s main floor. On the day my sweetie and I arrived on site, the first rounds of tournament play were taking place in a convention hall. An honest-to-God convention hall: 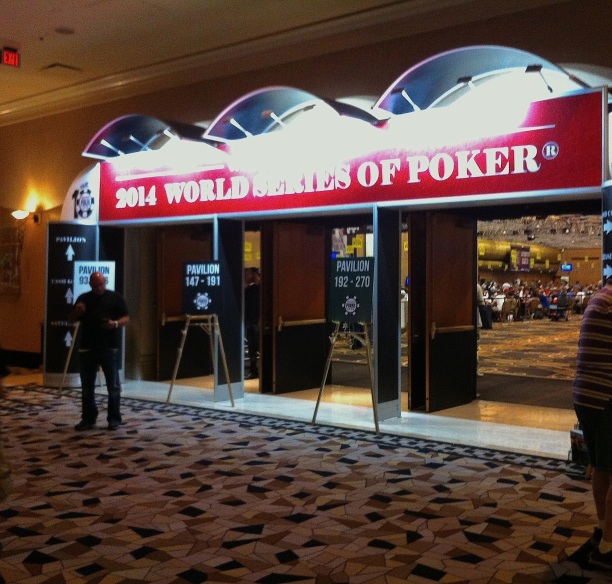 (Right side of the room.)

(Left side of the room.) I have no idea how many people were in this room; several hundred? A thousand?

With this many gamblers in a single room, one might expect the hall to be a cacophony of noise. In reality, the place was very quiet. Talking was minimal; the predominant sound in the hall was a rapid-fire click click click click click click click of a thousand people toying with plastic poker chips. The noise was unlike any other I have heard before – and it was very cool to be immersed in.

While the sound within the room was quite soothing, the energy of the space was intense. With literally ten million dollars on the line (yup – that’s how much the first-place player takes), the “playing” occurring in the room was serious business (in every sense of that term). Ninety-five percent of the men in the room wore incredibly stoic, almost statuesque I-refuse-to-reveal-the-slightest-damn-thing-about-my-situation faces. Around a third of the men in the room wore sunglasses, and several hundred wore hoodies and headphones as well. Looking at a few guys, I almost laughed out loud seeing the way they were ‘decked out’ (exposing basically just their noses and fingers) – but I managed to restrain myself.

A montage of players in sunglasses, hats, and headphones (with a camera man thrown in there as a bonus). 🙂

As I walked up and down the paths designated for event spectators, I could assess how good various players were by the intensity around them. Folks who were never going to see Day 2 of action were very casual about the experience, downplaying how much they ‘cared’ about the event. Individuals who had a shot at going further, but who most likely wouldn’t make it to the final rounds of play, were super-intense – like they were clawing their way up a mountain and holding on for dear life. The players who would likely make it to the final tables possessed energy between these two extremes: when their turn to make a move arrived, they became 1000% focused and attentive; but as soon as the action went to the next player, they relaxed a bit (sometimes even chuckling lightly, smiling slightly, or nodding to the audience around them). As a student of psychology, I was fascinated by all of these contrasts and examples occurring within the spectrum of human behavior.

Tables from a second convention room. On the right a guy is getting a drink; on the left another is checking his phone. Some players look “bored”, while others look like they are trying very hard. Some are slouched, others are upright…. it was a very interesting scene to observe.

As my sweetie, the other couple, and I all walked among various halls were WSOP participants engaged in activity, occasionally I would observe my sweetie and his friend nod with reserved excitement towards a man sitting at a nearby table. “There’s Daniel Negreanu,” one of them would ‘casually’ (yet eagerly) indicate for the other to see. “Hey, isn’t that Phil Ivey,” the other might ‘ask’ (tell), with just a hint of delight in their voice. While they would probably never admit it, my perception was that these two grown men were slightly star struck seeing some of their poker idols in person – similar to the way young boys likely feel upon seeing their sports heroes face-to-face at an autograph signing. These moments of male bonding were very sweet exchanges to witness.

After twenty minutes of walking around this “bizarro” business conference, the event organizers announced a 15-minute break for the players – and everyone was ushered (forced) out of the conference hall area, back onto the main casino floor. As I transitioned from the WSOP area to the everyday Rio space, I was saddened to re-enter the noisy, smoky, blingy overwhelm that is traditional Las Vegas. As an observer (i.e., free from the pressure of game play), the WSOP provided a lovely respite from all of the exhausting elements of Vegas. But alas, all things must come to an end. Before we left the casino, I stopped off to use the restroom – where for once, the line for the men’s room stretched far out the door, while the women’s room was completely empty. Yet another unexpected benefit the WSOP provided me. 🙂

Thank you for coming…

…and thank you for leaving.

A "serious" gal who is trying to remember to lighten up and smile.
View all posts by Stef →
This entry was posted in beyond 101, wplongform and tagged beyond 101, curious, experience, my sweetie, pictures, postaday, surprise, travel, wplongform. Bookmark the permalink.